LSU latched onto three St. Louis-area runners and convinced all three to continue their track careers running for the Tigers.

Ladue’s Samantha Levin showed she’s ready for the collegiate stage with an NCAA-caliber performance in the 800-meter run, smashing the day-old record with a 2:06.74 during the Missouri Class 4 track and field championships at Dwight T. Reed Stadium. Levin had just taken down the 1992 record with her 2:08.55 in Friday’s preliminaries.

“I wasn’t sure what my time was when I crossed the finish line (Friday), but I heard people cheering, so I thought maybe I got the record,” Levin said. “But I knew when I found out my time I wanted to go after it today.”

Just like in the prelims, Levin shot out to the front of the pack and built a lead that continued to grow throughout both laps. When she finished, the crowd gasped, then cheered as it became apparent what had just happened. “I definitely heard them,” Levin said. “Sometimes I don’t hear people in the stands, but I heard this time.”

Levin moves to third on the national rankings list for this year, but she said she isn’t done yet.

Levin raced one of her new LSU teammates, McCluer North’s Kendra White, on the third leg of the 1,600-meter relay. Then Levin handed the baton to the other LSU recruit, Montenea Roye.

Roye took the little bit of separation that Levin was able to build for her and broke the race open to set a new Class 4 record in the relay at 3:48.00, eclipsing the old mark of 3:51.48 set by Normandy in 1986. “I know what Sam can do and what Kendra can do,” Roye said. “As long as Sam holds her off, I know what I’m going to do on the anchor leg. I trust Sam.” 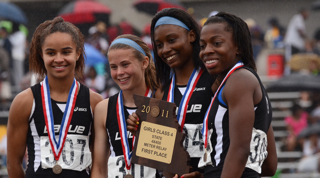 Roye had her own showdown with White in the 400, which Roye won with another meet-record time. Roye posted a 53.84 to edge out the 2010 record of 54.49 set by Cape Girardeau Central’s Asia Thomas. White finished second in 54.55. “I keep a track diary,” Roye said. “I write down every workout, every day, every track meet, and aintervals I run. If I want to see what I did two years ago on this very day, I can go look. The time I wrote down was 51.3, so I was .7 seconds off, but I’m still happy. I wrote it down, so I had to do it. No lies to my diary.”

Roye and White both had to regroup at the start of the race after Thomas was disqualified for a false start. “When she did DQ, it did throw me off a little, so I had to get back in my mindset really quickly,” Roye said.

White echoed, “It made me more nervous because I was like, ‘Oh boy, what’s going to happen now?’”

MICDS’ Lauren Waterbury left the Lincoln University stadium last year with a handful of runner-up finishes in Class 3. That did not sit well with the then-junior.

Waterbury returned as a senior determined to write a different story. Now her final chapter with the Rams reads “Four-time state champion.”

Waterbury started off the Class 3 finals Saturday with a long jump title. She had the best jump out of prelims at 17 feet, 6 ¼ inches, but Sullivan’s Macy Ritter popped a 17-10 ¼ in the finals, leaving Waterbury facing a runner-up medal again.

On her final jump, Waterbury cleared 18-5 to secure her first state title of the day. It marked her first jump over 18 feet all year and her second-best mark of her career. “I was beat both years, my sophomore year and junior year, on the last jump,” said Waterbury, who will compete at Brown University next year. “I was a little nervous because my coach said I was dropping out of the jumps in the last minute. Scratching always freaks me out, so I was just happy that I was able to hold the last jump, and I could just feel it after I jumped.

“I know how it feels both years, so I couldn’t let it get away this time.”

Waterbury then added an 800-meter relay title before taking first in both the 400 and the 200.

Raytown South had the chance to avenge its runner-up finish in the Class 4 800-meter relay just minutes later when the Cardinals came back and returned the favor to Hazelwood East in the 400-meter relay.

The same four girls came back with some anger to fuel their charge at the Spartans.

In the 800-meter relay, Amiris Warren could not hold off Hazelwood East’s Tianna Valentine at the line. “I actually don’t hear footsteps, but I could tell by the crowd getting all hyped,” Warren said. “Normally we don’t have anybody that close, But I think it’s good because it pushes us to become better.”

In the subsequent 400 relay, Alia Ward was able to fend off another Valentine surge to win in 47.67 to Hazelwood East’s 47.70. The Cardinals had established a new Class 4 relay record of 47.48 during Friday’s prelims.

Valentine nearly nabbed herself a record in the 100-meter dash when she came .03 of a second from Muna Lee’s 1999 Class 4 record of 11.66. The 11.69 that Valentine ran did tie her with her cousin, former Berkeley standout Alishea Usery, who set the Class 3 record with that time in 2007. 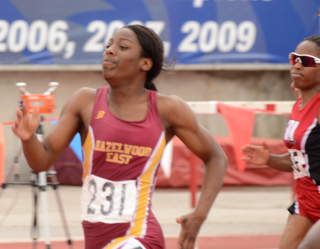 “I was trying to get the record,” Valentine said. “I should hopefully get it next year. I think it’s important to me because of my family and all their support, and I also want it for myself.”

Arcadia Valley’s Saga Barzowski has spent most of her season watching Potosi’s Sarah Jacobsen overtake her on the final lap of the 1,600-meter run. During Saturday’s Class 3 finals, Barzowski flipped the script on Jacobsen.

“Since I’ve lost to Sarah Jacobsen all this season, I knew she had a really strong kick,” Barzowski said. “I tried to stay with the pack in the first lap and then have a strong second and third lap so I could maybe get ahead.” 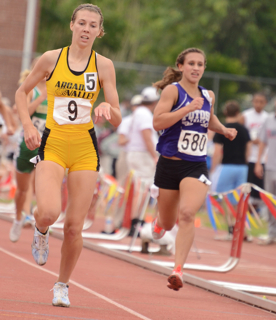 Barzowski’s plan was working initially. Then like in many of the previous meets, Jacobsen took the lead late in the race. This time Barzowski maintained contact and was able to unveil her own kick over the final 150 meters to capture the race in 5:05.77.

“I’ve been working on my speed more and doing lots of 400s,” Barzowski said. “I just knew I couldn’t lose contact with her because she has such a strong kick and she’s a good 800 runner. I think I’m fortunate to have raced her all this year and know her strengths and weaknesses.”