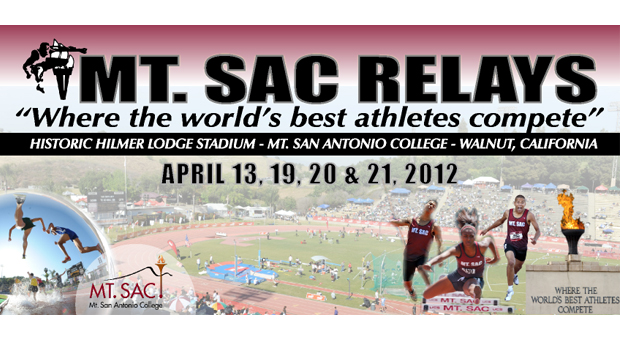 Hope all is well back in Missouri with the track season now in full swing. Just wanted to give you guys a quick, informal recap of all the MoMileSplit “alums” I was able to see compete over the weekend at one of the most prestigious college/professional meets in the country; the 54th annual Mt Sac Relays in Walnut, Calif.

My wife and daughter and I drove out on Thursday and made it just in time for the Invitational Division of the men’s steeplechase. We just missed former College Heights Christian star Caleb Hoover, now a freshman at Northern Arizona, run a PR of 9:04 to finish fifth in the C Heat of the Open/University Division. There were 26 athletes in his section which meant poor Caleb couldn’t even see the barriers coming half the time. I spoke with him afterward and he was satisfied but you could tell he was looking for more. I guess things haven’t changed! He told me he’s looking to break into the low 8:50s by season’s end and hopefully make it to Regionals. I also asked him what he thought of training in Flagstaff at the high altitude. He said he hasn’t been able to finish a mile repeat workout yet but added that he’s always been a better racer than trainer anyway.

We also just missed another great racer; Springfield Kickapoo alum Rick Elliot who competed in the Olympic Development section of the steeplechase. It was a very fast heat with the winner going 8:36. Rick finished 21st in 9:02, a time that will likely be on the bubble in terms of getting into NCAA Regionals. Last year he advanced to the NCAA Championships when he ran his PR of 8:52 at the Regional Meet.

The next race we were really looking forward to was the Invitational Men’s 10k where Arkansas star and former Missouri State Champ Eric Fernandez would be gunning for a time around 28:15 to try to ensure his spot at the Olympic Trials this summer. Unfortunately, after two months off with an injury where he spent a lot of time in the pool and on the Alter G machine and after only a couple weeks of actual running, it just wasn’t his night. He struggled home in just over thirty minutes, almost a full minute-and-a-half off his PR. He was bummed afterward but in classic Eric fashion he was still able to see the big picture and with the SEC Championships coming up he’ll still have an opportunity to make sure he punches his ticket to NCAA Regionals (aka the first round of the NCAA Championships).  There he’ll hope to advance to the NCAA Finals after just missing out in 2011.

The Olympic Development heat of the 10k had two MoMileSplit alums toeing the line in Phillip King and Max Storms who both run for Mizzou.  King was not at his best and fell off the lead pack fairly early so it was up to Storms to represent the Tigers at the front. He did just that hanging right there in a pack of six-eight guys that kept churning out 70-second laps on a perfect night for distance running in Southern California. Watching from the stands you could just tell Max felt good and even when the pack broke up in the last mile he fought hard for every place and every second he could get eventually crossing the line in 29:15, a big personal best and a University of Missouri school record. I tried to do a video interview with the man of the hour the next night but my camera died. We did have a nice conversation though and you could tell the vibe at Mizzou is really good right now. He said their new coach, Joe Lynn, has brought a lot of intensity to the group and I can tell you that whatever he’s doing seems to be working as Max’s race was not the only big Tiger performance of the weekend.

Friday was another big day of track and field at Mt Sac. As is typically the case there the temperatures in the middle of the day were quite hot, near 90 degrees, but right around 6:30 the sun begins to go down and the air becomes cool and calm. It’s an ideal location for distance running and you can tell by the stadium records that include a sub 3:55 men’s mile, a sub 32 women’s 10k, a 13:11 men’s 5k and a 14:44 women’s 5k by Shalane Flanagan that was the American Record at the time.

First up to try and get in on those fast times from Missouri was Georgetown senior Lauren Borduin. The Rock Bridge alum was in the Invite section of the women’s 1500 and the 4:11 up front from Washington star Katie Flood dragged Borduin along to a PR of 4:26 which should have a chance to make get her to NCAA Regionals.

The next big race of the night involving Missourians was perhaps the most-anticipated event of the evening; the Invitational Division Women’s 5k. With American record-holder Molly Huddle headlining the field you knew it was going to be fast and that’s just what Providence sophomore Emily Sisson wanted. She hung on gamely to the lead pack for the majority of the race and it paid off in the form of a 15:34.5, just under the Olympic Trials A Standard of 15:35. Huddle won the race in 15:15 with a blazing 63-second last circuit. Now that her place on the line in Eugene is secure Emily can focus on the Big East Conference Meet and the NCAAs where she’ll try to add another All-American certificate to her trophy case. [See Emily’s post-race interview below]

Next up was the Invitational Division Men’s 5k. Just getting into a field that included Southern Utah’s Cam Levins, Arizona’s Lawi Lalang and Australia’s David McNeill was an accomplishment in and of itself. Arizona State’s Nick Happe was in there though and he was right in the middle of it. A first mile around 4:18 and a 3000-meter split around 8:18 seemed to do him in though and he conceded quite a bit of ground over the last mile. The race up front lived up to the hype though with Levins laying down a 55 second  last lap to get the best of Lalang and McNeill. All three went under the Olympic A Standard of 13:20. Happe will live to see another day though. For those who haven’t been paying attention the Francis Howell North grad had an amazing indoor season running under four minutes for the mile, under eight minutes for the 3k and under 14 minutes for 5k. At the NCAA Indoor Championships he fell with 100 meters to go or he would have likely advanced to the final in the mile and been an All-American.

In the women’s A Heat of the University/Open Division St. Clair grad Ashley Scott did a nice job to finish 20th in a personal best 16:38.  Scott runs for Tulsa, a school that seems to have a pipeline to Saint Louis with SLUH alums Austin and Emmet Cookson, Casey Fitzgerald and Tim Rackers all competing for the Golden Hurricane. They also have former MoMileSplit favorites Sam Masters and Danny Thater on the roster along with a few other Missourians.

There are so many good runners at Mt Sac that, if you can believe it, the fourth heat of the men’s 5k still typically goes under 14 minutes. Mizzou’s Dan Quigley found himself in that heat, though as he went out and showed, he would have fared quite well in the third heat or even the second heat as well.  Dan took the lead midway through the race to push the pace and ensure a fast time. His move broke things up and by the time there were two laps to go it was down to two with Quigley battling David Rooney from McNeese St. Rooney bested Dan over the last 400 but both runners went well under 14 minutes. Dan stopped the clock at 13:55, a personal best and the second Mizzou school record for the current Tiger team in as many days.

Hope you guys enjoyed the recap. Sorry to all the sprinters, hurdlers, jumpers, throwers and middle distance runners who I didn’t get to see but with a one-year-old in tow I was only able to see the distance races!

See you at the Festival of Miles: http://bigriverrunning.com/FestivalofMiles/index.php