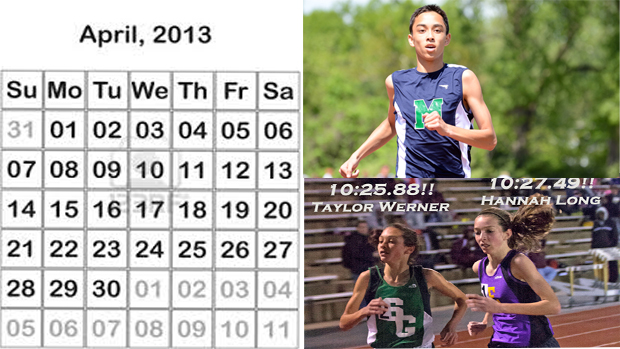 April.  It's a time we normally associate with spring, warmer weather and days getting longer. In Missouri, the high school track and field season moves into its second month. Usually an athlete will catch the attention of fans across the state and someone will say something along the lines of, I can't wait to see what they can do at the state meet.  During this first week in April of 2013, Missouri fans were treated to some truly amazing individual performances.  While some may debate whether or not you should be performing so well this early in the season, these performances are outstanding accomplishments that reflect on both improved coaching techniques and an increased level of competetion.

Just seven days in, this month already has been an April for the ages.

On Tuesday evening Taylor Werner, just a freshman a few weeks into her first track season, ran a 3200 meter race with Hannah Long that produced a 10:25.88, a few ticks under Megan Thompson's 1989 record that was finally broken by Emily Sisson in 2009.  A few nights later in California at the Arcadia Invitational, Noah Kauppila, another underclassman, a junior from Marquette High School ran a 8:54.22 for 3200 meters, just a little more than half a second slower than future Olympian Matt Tegencamp ran 14 years ago.

Personally I'm not going to project what this means for these student athletes at state.  The weather can be very difficult and athletes are usually competing in numerous events.  For now, this is certainly an April to remember.

Here are a few other highlights from performances over this past week.

Amos Barlelsmeyer ran a 4:13 mile and its been reported that Spencer Haik ran a 4:14 for 1600.  While these marks are still a ways from the best ever in Missouri, I haven't found any of this caliber so early in the season.

It's not all about distance runners....

Caleb Mather from Maryville threw the shot 59-6.5 this past week, 7th all-time in our database.

Josh McDonald from Timberland threw a 192-6 in the discus, 3 inches above his best in 2012 and 2nd all-time in our database behind Chirs Rohr.

There have been some great performances in the sprints and hurdles as well especially given the cooler spring we have had.