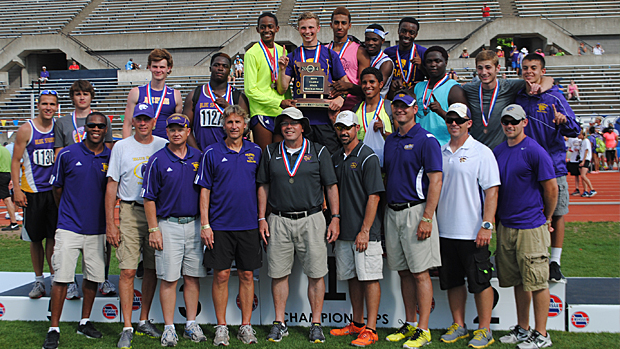 JEFFERSON CITY, Mo. – Blue Springs dethroned Hazelwood Central as the boys champions of Class 4 at the state meet, and the Wildcats did it by scoring all over the track.

Blue Springs brought 13 entrants to the state meet, and 12 of the 13 placed in the top four, including two individual champions – Carlos Davis’ record-setting discus and Jacob Peister in the triple jump – to tally 83 points, the most by a Class 4 champion since McCluer tallied 88 in 1992.

Hazelwood Central came in as the four-time defending champion and finished third with 42 points as Lafayette grabbed the runner-up spot with 44. CBC earned the fourth-place plaque with 35. 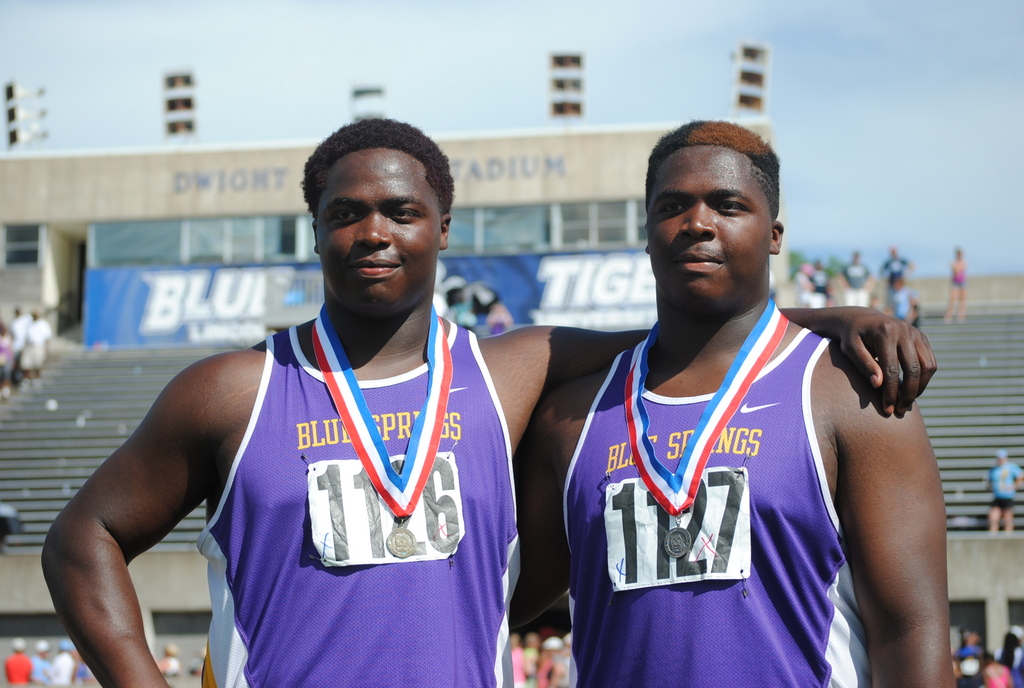 Blue Springs garnered a large chunk of its points out of Carlos and Khalil Davis in the discus and shot put. The junior twins accounted for 28 of the team’s 83 total points, and Stephen Mugeche contributed 19.5 (dividing the relay points by four) to the tally with medals in all four distance races.

But coach Joe Cusack was quick to point out that Blue Springs is more than just a few standout athletes.

“A lot of people look at our team and say, ‘They’re all about Stephen Mugeche.’ We love Stephen Mugeche. This team is not Blue Springs High School without Stephen Mugeche,” Cusack said. “Stephen scored 19.5 points this weekend, and he did a great job. He does a load for us, and coach (Frank) Gallick prepares him to do a heavy load. Take 19.5 out of 83 and we’re still at 64 roughly. And then they say we’re about the Davises. Take the Davises’ points out and we’re still in the 50s, and so it was a well-rounded team effort, but we have some high school All-Americans on this team.”

Before Carlos Davis established a new national No. 1 discus mark for this year with a throw of 212 feet, 5 inches, he took third place in the shot put. He saw it as another opportunity to help the team.

“I just wanted to go out there and do my job and get the team points,” Carlos said. “Anything above that I’m happy with, but I was satisfied with third place.”

Even Cusack had to stand in awe of Carlos’ discus.

“I’ve seen Khalil throw 198 and Carlos throw 194, but to go over 200 …,” Cusack said. “I challenged them to both go over 200 on the same day. They came over and said, ‘Coach, we both didn’t go over 200.’ But when one of them throws a national leading throw and a state record, I mean that’s the No. 1 throw in Missouri history – unbelievable.

“Our philosophy in our program is when we go to track meets, we compete to leave people with something to remember and I think we did that today.”

Lafayette’s Dylan Quisenberry couldn’t hide his disappointment following Friday’s last-second runner-up finish in the 3,200-meter relay. After pushing through on the last strides of the 1,600 to overtake second place, Quiensberry finally got his victory in the Class 4 800-meter run (1:54.52).

He fought off Kearney’s Sam Oxandale in the final meters of the race and earned his place atop the podium. Oxandale finished second in 1:54.90.

“I didn’t know how I was going to feel after the (1,600). I was breathless when I found out I won it. I came around with about 200 left and was like, ‘Man I still have something left,’” Quisenberry said. “I put all my heart into that final straightaway, and it was an identical feeling to yesterday’s (3,200 relay) where my body was just shutting down. I was just like, ‘Don’t give up on me now. C’mon legs.’ I wouldn’t let it happen again.”

Hazelwood Central picked up 16 key points out of Marcus Davis and Brandon Chunn in the 400-meter run. Davis pulled away from the field at the end in an eye-popping 47.07.

“I heard Jarred (Pasley of CBC) and Brandon coming at the 200, so I decided to kick a little earlier and luckily I held out,” Davis said. 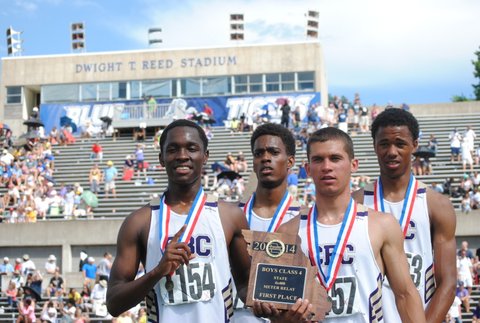 CBC’s fireworks came in the final event when its 1,600-meter relay team flirted with the state record. The Cadets put themselves out of reach from the rest of the field and dropped a 3:14.98, less than a second off the 1986 record held by Hazelwood East, and fast enough to slide in as the 13th fastest relay time posted in the country this year.

Half of the Cadets’ relay returned from last year’s championship relay team (3:16.12), including Stephan Hickman, who said the team had a singular focus all season.

“We were chasing that record all year. The first day coach told us we were going after it,” Hickman said. “We come to practice every day making sure we’re all together, working at it and pushing each other, holding each other accountable and doing everything we can to chase it down.”