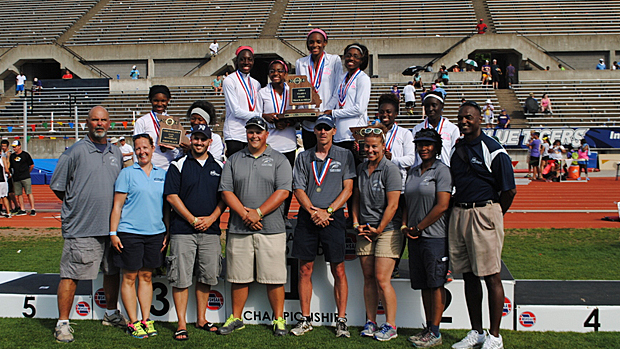 The Stars had never earned a state plaque in track and field, not even with a single relay. That drought came to end as McCluer North put up 65 points to secure first place at the MSHSAA Class 3-4 Track & Field Championships.

McCluer North junior Jasmine Barge was at the center of many of those points, winning the 100-meter hurdles (14.53) and then setting an all-class record in the 300 hurdles with a 41.79 to break the 2000 record of 42.52 set by Shaneatra Neely of Hickman Mills. 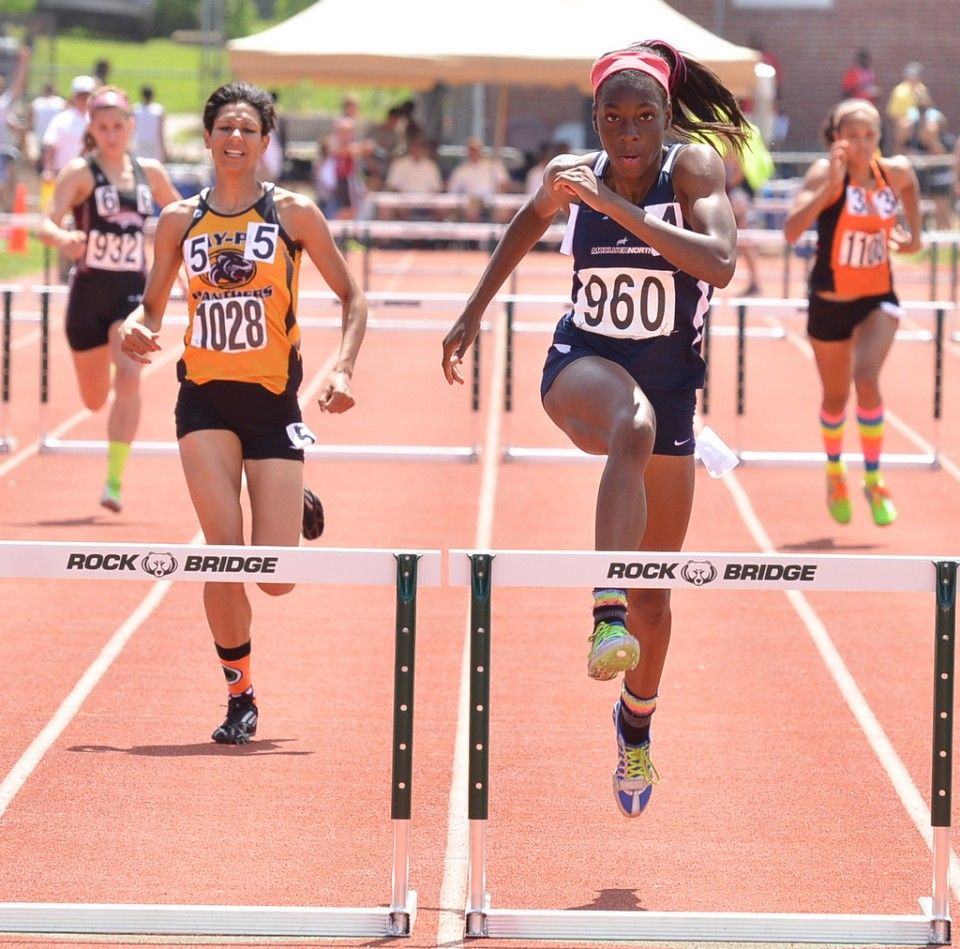 “Jasmine has no idea how good of an athlete she is,” McCluer North coach Sheldon Webster said. “She came to us from Ritenour and came to us last year. It’s the second week of practice and the wind is blowing and the rain is coming down, and I said, ‘I see something. You’re going to be a great 300 hurdler for us.’ She says, ‘I don’t run the 300 hurdles. I run 100 hurdles and 4x1.’ I said, ‘You don’t understand. I’m not asking you, I’m telling you, you’re going to be good.’ She has no idea.”

“I cried when I found out,” Barge said. “I wasn’t planning on it. I thought Morgan (Smith of Ray-Pec) was going to beat me, because she’s the one who has been pushing me all season to get where I am now.”

Senior Rachel Culberson also ran on the two winning relays and finished second to Lee’s Summit West’s Jamie Newsome in the 400 with a time of 56.90.

“It was darn near a perfect meet,” Webster said. “We sat there in a team meeting Thursday night and said, ‘Alright, we’ve had 500 moments and we have 13 more. And the mantra as you walk by, ‘10 more. Eight more. Two more.’ One moment at a time, they were perfect.”

Lee’s Summit West was bolstered by Newsome’s 400 victory (56.11), as well as her part in the runner-up 1,600 and 3,200 relays. Newsome said the schedule this year at Dwight T. Reed Stadium was more beneficial to her race plan and allowed her to attack the 400, unlike last year. 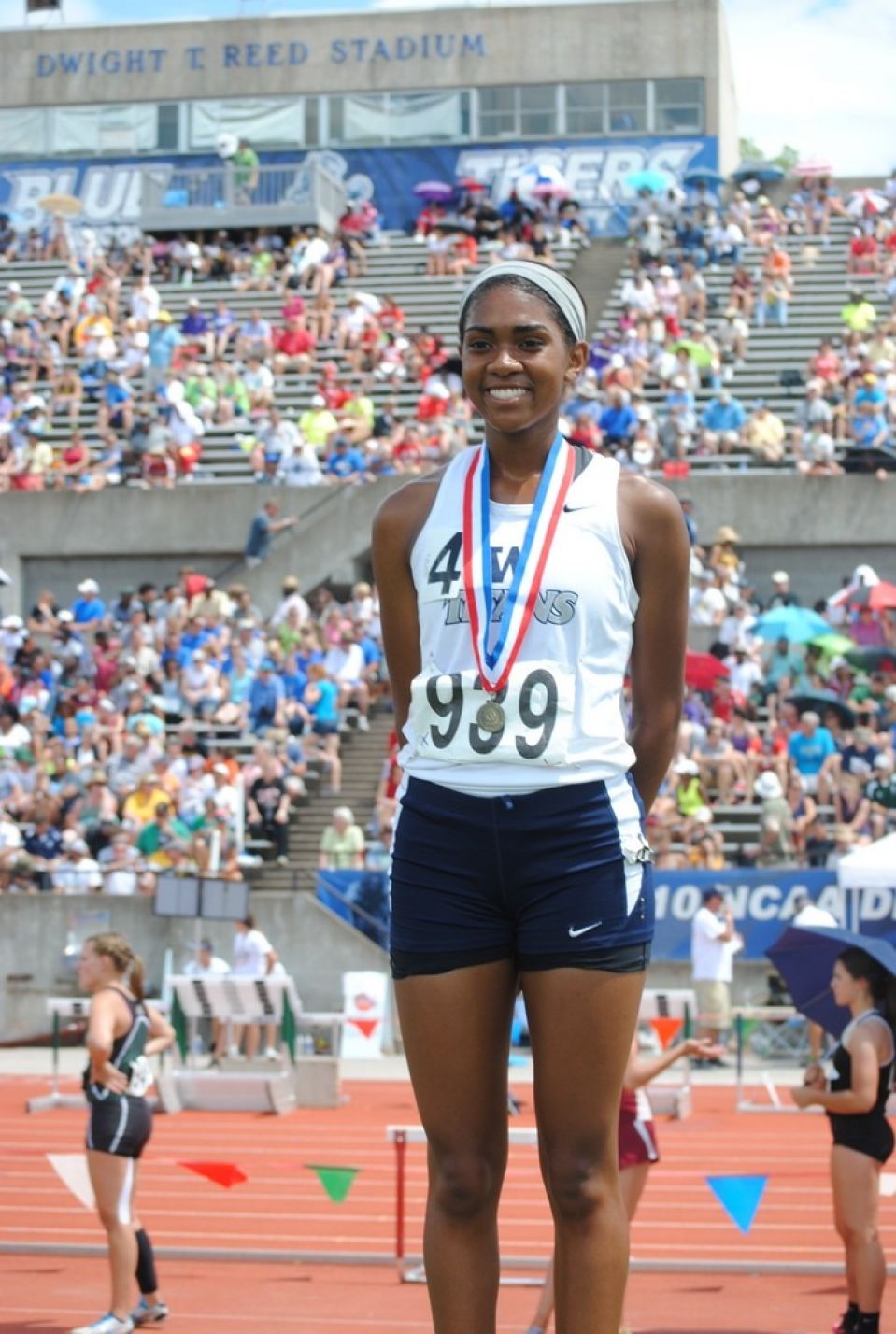 “Last year it was kind of difficult because I had the 400 and triple jump at the same time,” Newsome said. “I had a greater chance at the triple jump, so I had to jog the lap and got eighth. I was so glad to have the triple jump yesterday and not have anything get in the way of my 400. To actually be able to run my 400 as hard as I could today, that felt great.”

It all helped contribute to the Titans’ runner-up finish in the team standings with 52 points. Hazelwood Central finished third with 46. 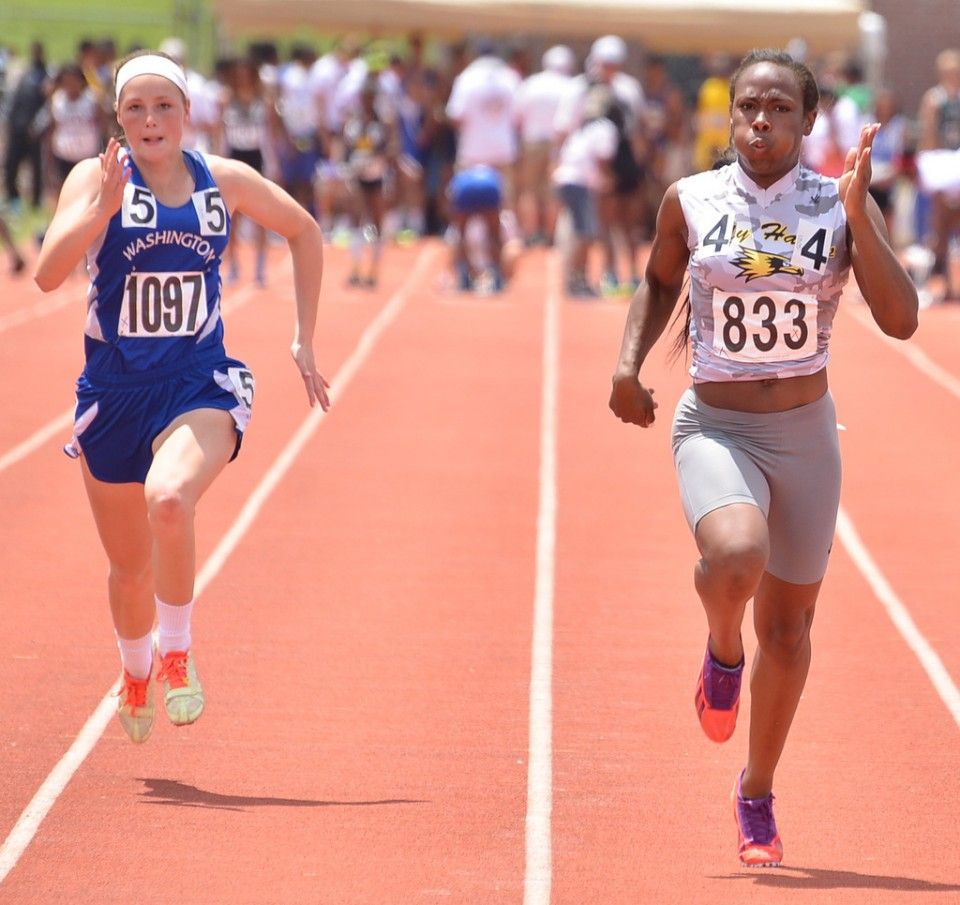 “I thought my block starts were horrible, and I just came back with my speed,” Henderson said. “Being the target is definitely pressure, but coming in as the defending state champ I wanted to go at as the state champ as well. I didn’t even hear the time I was so focused on the fact that I won.”

Eureka picked up the fourth-place plaque with 40 points, which all came through Hannah Long in some fashion. She swept the three distance races, including breaking a 25-year-old record in the 1,600 on Friday with a 4:46.21. She also anchored the 3,200 relay to begin her Saturday and brought the Wildcats back from a seven-second deficit when she got the baton in third to first place in a time of 9:11.20.

“Our whole goal was to get up in first place, so I just took out fast and tried to hold that place if I could,” said Andra Staicu, who ran the second leg for Eureka. “Lee’s Summit West did really well today; we were pretty scared of them when we came today. I’m just glad that Hannah worked her magic. We knew that Hannah could do great things, and she did.”

Long ran a split of 2:09.76 to catchup to and pass Lee’s Summit West’s Annika Sisson. The runner-up spot was just fine with Newsome.