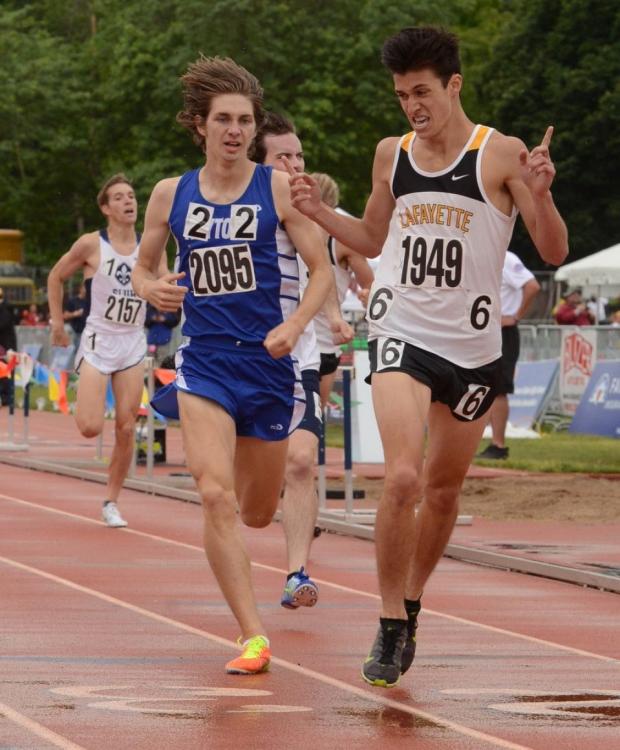 Jefferson City - Lafayette junior Alex Haines could not have picked a better time to win his first 1,600.

Haines went to the front of the pack on the second lap, but he saw teammate Dylan Quisenberry overtake him on the backstretch of the final lap while Marquette’s Keven Ganahl and SLUH’s Dustan Davidson pulled up alongside him. As they pulled into the final straightaway, Haines surged again while Raytown’s Zack Penrod came storming past the pack from fifth place.

“I looked back and they were closing on me,” Haines said. “I had to kick, and usually these guys out-kick me, but I had one today.

“I was worried that everyone else was going to pass me because that’s how it’s been all season, but I held it under my control.”

Haines dropped another three seconds off his sectional time, which was four seconds faster than his previous PR of 4:18.

In Class 4, Fort Zumwalt East’s Sean Conlin didn’t want to leave the race up to anyone’s last-second kick. He took off on the second lap and quickly built a gap that the field could not overcome.

“The reason I go early is so that it doesn’t come down to a sprint in the last 100, because that’s tough. It’s anybody’s game there,” Conlin said. “I try to use my energy a little earlier and spread the playing field out a little bit.”

Conlin, who shaved four seconds off his PR, started the first lap in the middle of the lead pack. He was content to let the race come to him, but he knew not to wait too long. He said the calm start allowed him to pick his spot to surge, but it also meant he had to build that gap or fall victim to someone else’s kick.

“I think it was partly attributed to not exerting myself at the beginning because the lactic acid would’ve built up,” Conlin said. “It’s kind of scary to do. It’s scary to let people get away from you, but you have to know if you run consistently you’ll come back around and catch them.

It was a nice piece of redemption for Conlin who had last year’s state meet unravel as it was just getting started. After the early 4x800, he went to a hotel to relax and began running a fever, and the rest of the meet was downhill after that.

“I had a terrible two mile and then scratched the 1,600 the next day,” Conlin said. “So this is my first time I’ve raced an open event at state, even though I had qualified. There was a lot on the line

Conlin could not repeat in the 800. He used a similar tactic to the 1,600 and started his surge early, but Rolla’s James Kosbar went with him and caught him in the last strides toward the finish line. 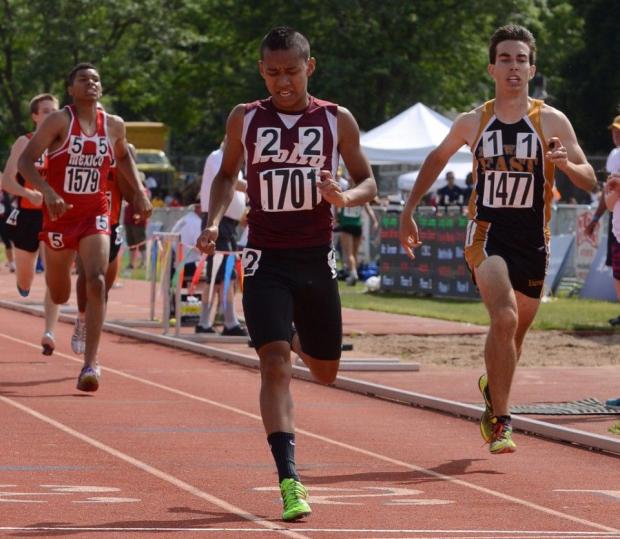 “I just dropped 3 seconds off my time,” Kosbar said. “I can’t believe I did it. Sean Conlin paced me well. I just had that little bit extra in the last 50.

“We went out pretty slow for the first 300, and I guess he wanted to pick up the pace so I went with him. Thankfully I held on. That last 100 I knew I could get him.”

Darrien Case, a Park Hill South senior, said his first indoor season was a big factor in him capturing the Class 5 800 title in 1:53.63. He wasted little time in setting a fast pace, splitting the first lap in 53.64. He then had to hold on as SLUH’s Dustan Davidson tried to run him down in the final 200 meters.

“I knew all my competition was running the mile, and I knew I had to come out and run a fast first lap and make sure they couldn’t hang on for the second,” Case said. “I was questioning (the strategy). I started tying up the last 50, and I was like, ‘Ok, c’mon, you just have 50 more and you’ll be the champion.’ I just kept telling myself that until I was passed the line.

The change in class mattered little to Daylan Quinn of Liberty (Mountain View). He won the 1,600 last year in Class 2, and the move up to Class 3 didn’t hamper him in the slightest as he won gold again after leading nearly the whole race before crossing the finish line in 4:18.49.

“From what I saw it was basically the same competition so I was going to try to win it and run fast,” said Quinn, who also won the 800 in 1:55.81. “I don’t like waiting (in the pack). The time was slower than I wanted, but it got the job done.”