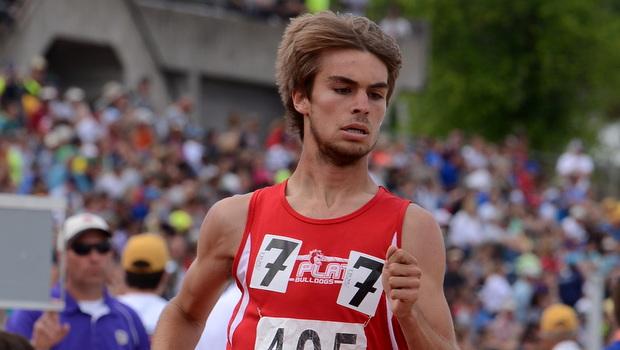 My most memorable race would have to be the developmental mile at last years FOM. That race was a huge confidence boost for me because I was able to come away with a win against some of the guys in the bigger classes. Before the race I believed I was able to hang with some of the top runners in the state, but I felt as if it really solidified my spot and gave me the reassurance that I could run with the top guys.

Who was your biggest competition?

I would say Malik Holman was my biggest competition throughout high school even though we didn’t get the opportunity to race this track season. It was usually a toss up on who would take the win and that made it so much more enjoyable. For cross country he usually came away with it but for track I snuck a couple in on him. We have also became good friends through the meets and camps we went to. This made every race a lot more fun for both of us because they were all close finishes but there were no hard feelings after each run.

What will you miss the most?

Without a doubt, I’ll miss my family being at every meet. The only downfall of deciding to go out of state for school was the fact that I wouldn’t have the normal cheering section. My family has definitely spoiled me in that regard but I know when they decide to come down it will make it a lot more special.

Do you have any advice for younger athletes?

My advice for all younger athletes would be to stay confident in your training and ability, but don’t become complacent. Throughout high school I have never had any issues with confidence, but an overabundance of confidence can lead to complacency. Whether it was training or racing I had a bad habit of thinking I could do the task at hand relatively easily, and that often led to a disappointing result. You never know how you will feel in the upcoming race or workout so taking it seriously is essential.

My advice for up and coming class 1 runners would be to believe you can run with anybody and don’t think you can’t do something just because you go to a smaller school. There is a definite feeling of inferiority in the smaller classes that anyone in class 1 can relate to. That feeling creeps into the mind of many runners and holds them back because they don’t think they belong; however, there has been some amazing class 1 runners from Missouri do some big things. Blake Goodin and Caleb Hoover are proof of that, just to name a couple. So don’t worry about the size of the school you go to, just run. #Class1Wonders

I will be attending Baylor University in Waco, Texas to major in business. I will also run on their track and cross country teams. I am super exciting to start this new journey and I know Baylor is the perfect place to help me grow. Sic ‘em bears!

Who would you like to say thank you to?

I wish I could thank everyone that has helped me throughout high school but considering the support I have had it is definitely not possible. I will try to thank as many as I can though. First and foremost, I want to thank God for giving me the ability and opportunity to run and participate in the sport I love. Also, the entire La Plata community and other communities in northeast Missouri, my coaches: Matt Kennedy, Kyle Fleshman, and especially Anissa Angelosante (without her none of my accomplishments would have been possible), and a huge thank you to my great family. I also feel like I need to thank a couple people by name: Richard Burns for always promoting track in the La Plata area, Stan East for the words of wisdom, Mrs. Carter for all the great pictures and support, Bill Bullock for the support and words of wisdom, Patrick Jochemson for being my biggest supporter, Blake Goodin for setting a great example as a class 1 runner going on to the next level and for all the great support, Chaz Walgren for all the support, words of wisdom, and advice on college, Nancy Platz, Wilson Belt, Coach Ramsey, my boy Mitch Cox - follow him on twitter (@MitchCox2), Andrew Gordon, and my mom for all the things she does. I honestly don’t know how she does it, she’s a saint. I have had the absolute best support system possible and there has been no reason for me to not succeed.