I'll leave this site with so many memories of being your webmaster the past 6 years. I've compiled my list of 10 stories I'll always remember. This is not intended to be a list of the best athletes but simply personal reflections of the stories we have brought you over the past half a dozen years. My thanks to Craig Martin who's ability to tell a story is one I envy. Finally this list is really just tenstories presented one at a time as opposed to a ranking.

There are moments when the story of just being able to compete IS the story. Craig Martin shares a story from the 2011 State Track and Field Meet 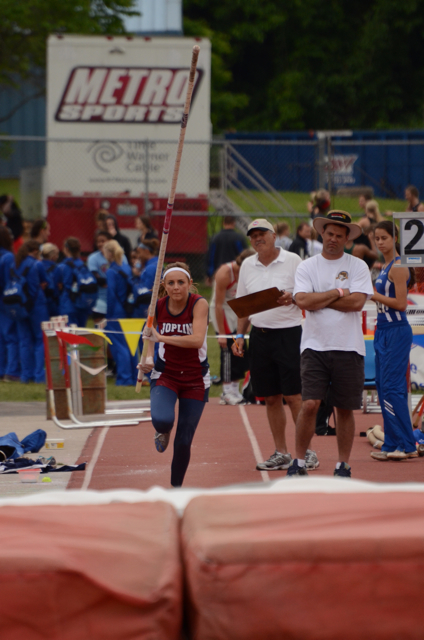 JEFFERSON CITY, Mo. While Mariah Sanders may not have made the medal stand in the pole vault, she still garnered some of the biggest applause from the crowd at the Missouri Class 3-4 state track and field championships Friday.Sanders was the lone state qualifier from Joplin, and she made the trip to the state meet despite the struggles of the past week following Sunday’s devastating tornado. Sanders equaled her career best by clearing 10 feet in the pole vault, but the place and the height were really irrelevant.Sanders, a junior, was in Seneca visiting friends when the storm hit.“The person I was with, his dad works for the city of Joplin, and he was paged to go in,” Sander said. “He said, ‘You’re not leaving; there’s been a tornado that hit Joplin.’ I didn’t think anything of it. I thought it was just a warning, nothing was going to happen. It was perfectly clear where I was, which isn’t far from Joplin.”Then the text messages start to roll in