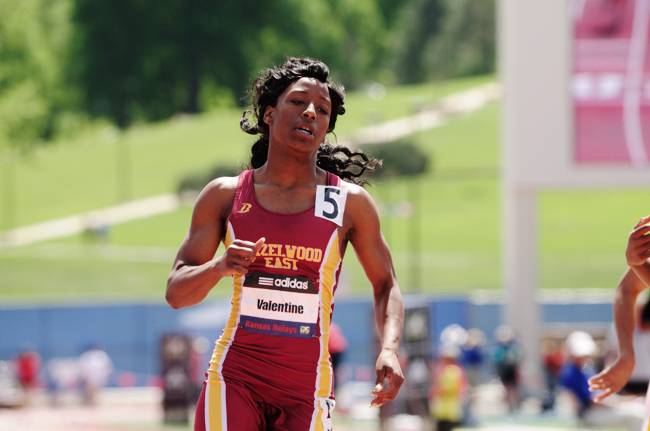 LAWRENCE, Kan. – Hazelwood East senior Tianna Valentine likely still had a big smile on her face when she got to her prom Saturday night, and it wasn’t the typical prom picture grin either.

Valentine earned a return trip to New York for the Adidas Dream 100 with her 11.66 Saturday at the KU Relays. Valentine qualified for the Dream 100 last year and finished fourth in 11.96.

“It’s amazing. That’s why I’m so happy that I’m going back this year because I want to progress, and it’s going to do nothing but make me better.”

There was a slight tail wind that registered 2.7, just over the allowable 2.5. With just four legal wind times below the 11.7 qualifying mark, and the remainder of the season for her to run even faster, there is little doubt Valentine won’t be included in the Dream 100 field. 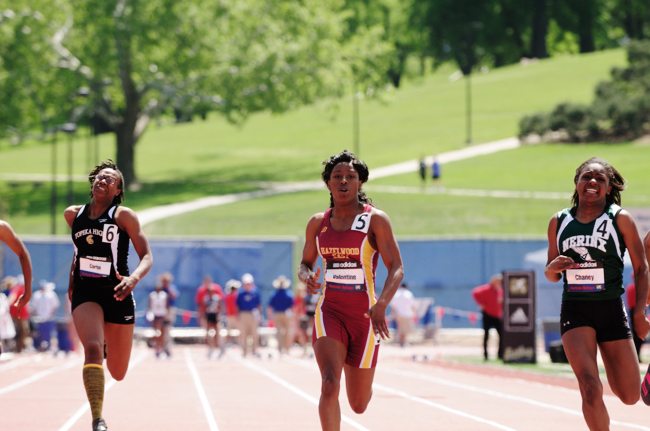 Saturday’s quick start helped her get in front of the field that included rival Peyton Chaney of Nerinx Hall. Chaney, who also raced in the Dream 100 last year, just missed the Adidas standard with a second-place time of 11.73.

“I just know that once I’m up against her, we’re going to be fighting,” said Valentine, who will return to KU next fall as a member of the Jayhawks.

There were no automatic qualifiers for the Dream Mile. Shawnee Mission West’s (Kan.) Alli Cash missed the girls’ standard by two seconds with her winning time of 4:50.68. Drew White of Festus is halfway to qualifying after winning the KU Relays boys’ 1,600. The meet is one of three to send the winner to New York so long as the qualifying time is met. 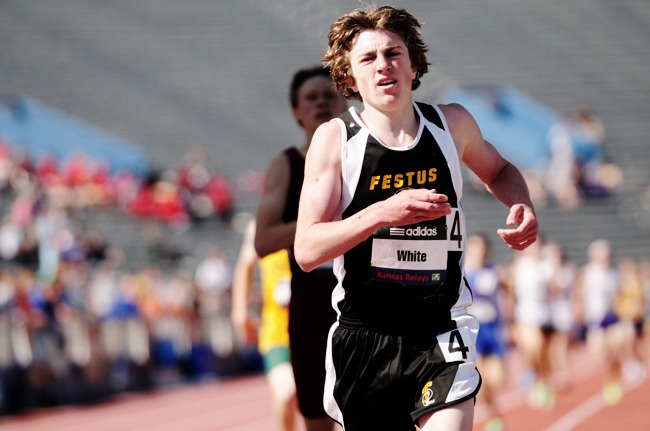 “It didn’t go out fast enough to be a fast time,” White said. “I knew that was kind of how it would be because there were so many guys looking for that first-place finish. I didn’t do anything stupid, just hung off the pack, and had a good kick that won me the race.”

White, who recently ran a 9:04.08 at the Arcadia Invitational, had been focusing on eclipsing the 9 minute mark in the 3,200. Now he said he might have to focus a little more attention on the 1,600 in an attempt to hit the standard. White would need to run a 4:08.55 before the end of the season.

Saturday brought the second hurdle showdown of the KU Relays between Grandview’s Dapo Akinmoladun and John Burroughs’ Ezekiel Elliott. The two have swapped victories in the hurdle races the past couple seasons, and Saturday was Akinmoladun’s turn to shine. 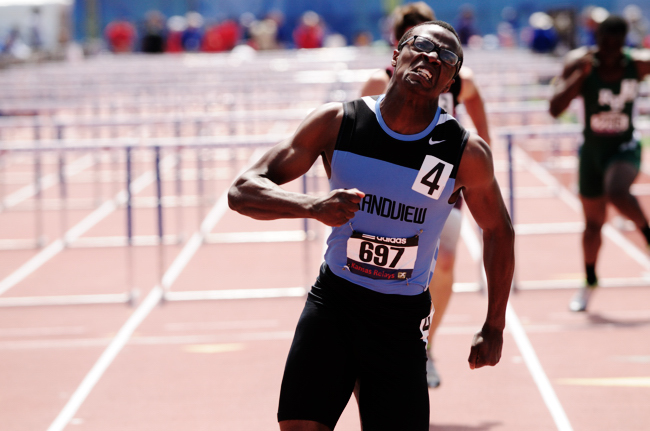 Akinmoladun exploded out of the blocks and maintained his early lead all the way down the track to win the 110-meter hurdles in a meet record time of 13.75.

“I haven’t been a good starter my previous years, and I’ve been working on that a little bit,” Akinmoladun said. “It’s KU Relays, I have my school here, the University of Nebraska, my friends and family, it’s a huge meet and Ezekiel’s here, all the factors lead to a good environment to help me compete as best I can.”

Francis Howell junior Whitney Adams set a new PR in the 400 with her winning time of 55.28. She began the race fast and then had to hold off Clara Nichols of Millard South (Neb.) down the final stretch.

Adams said Friday’s preliminaries in cold, windy weather sapped her strength and made Saturday’s final more difficult than she anticipated.

“The weather, it just really tired my body out,” Adams said. “I wanted to go out faster and set my pace. Today had really good weather, so I think that’s why I was able to get out how I wanted to.”

Liberty surged from the middle of the pack in the first heat of the 3,200-meter relay, and anchor Zach Pixler overtook the lead with 300 meters left to give the Blue Jays a PR time of 8:10.52, which placed them eighth overall and is a state top 10 time.

“I’d rather be behind the guy; I like to chase,” Pixler said. “This was my fourth race of the weekend; I raced three yesterday. I was a little worried about how I was going to feel. That last 300 when I went, it didn’t hurt and I felt good.”

Photos (except Adams) by Brandon Daniels