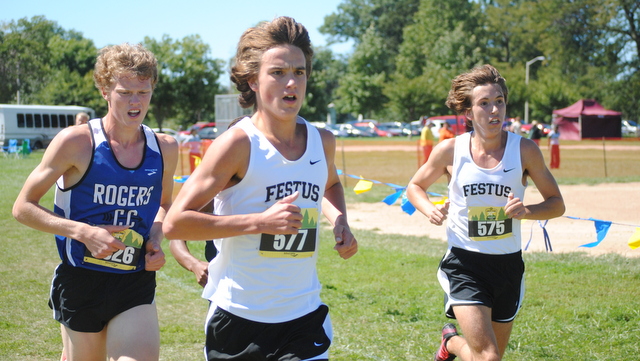 ST. LOUIS – Seven of the state’s top 10 teams, and even more out-of-state powers, created a loaded lined up at the start of boys’ Green Division of the 2014 Forest Park XC Festival Saturday.
After a few passes over the muddy trail, Festus stood triumphant and claimed the boys’ title with 93 points, edging out O’Fallon (IL), which scored 110. SLUH was third with 119 points.
Festus benefitted from the front-running duo of Michael Karls and Tyler Gillam, who finished second (15:30.5) and fourth (15:43.2), respectively. The two Festus Tigers were part of a lead pack of five or six runners that stayed bunched together through the first half of the race. With about a half mile left, O’Fallon’s Dorrian Gordon pulled away for the victory (15:25.1) and stretched out the lead pack.

“I knew I was going to go out with that big pack, and I pretty much expected everybody that was up there to be up there; I was just trying to hang on with everybody and then things started to spread out a little bit,” Karls said. “I’ve had pretty good kicks, but I don’t have one of the better ones like Dorrian would. I just try to hang on as long as I can and trust that I can dig it out.”
Karls said the Tigers, which entered the race ranked fifth on momilesplit.com, are motivated by last year’s runner-up finish at the Class 3 state meet. And he added the Tigers want to be regarded as one of the top teams in the state, regardless of class. Festus coach Bryant Wright echoed that sentiment.
“These guys set a goal for themselves this year that they wanted to be one of the best teams in the state of Missouri, not just Class 3, and so what this tells us is that these guys are ready to race, and this week we ran with the best of them,” Wright said. “It’s an honor to be their coach. It’s kind of a humbling experience to see where these kids come from and see how they succeed and how hard work really does make a difference.
“I’m proud of them today, but they know the next thing I’ll say is that this doesn’t mean a whole lot because the end of the season is what counts. I’m extremely happy for them, and it’s exciting to watch them race.”
Karls and Gillam are the anchors of the team, but they do more than post low scores for the Tigers. They help bring the rest of the team along, including Jacob Schweiss and Hunter Darnell, who gave the Tigers four medalists with their Top 25 finishes, too.
“They create the focus for the team,” Wright said. “Having them up front is great, but what they do for us as leaders is also something people don’t see. Jacob Schweiss is a great runner in his own right as a junior, and they’ve taken him under their wings and they’ve developed him. They don’t let him have an excuse.”
O’Fallon was making a bid to repeat as team champ for the third consecutive year, and the Panthers were right in the mix after Gordon pulled away over the final 1,000 meters. Gordon stretched his lead to five seconds as the front pack made its final turn toward the finish line. 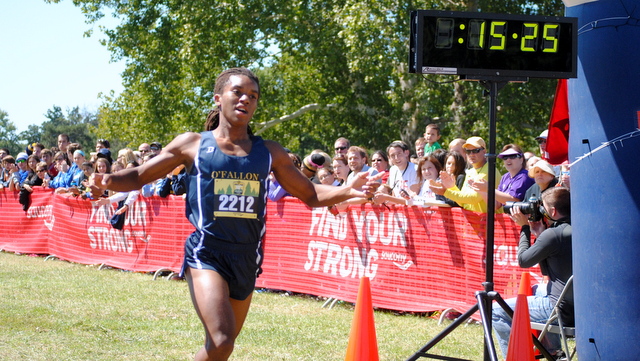 “I was looking to race (Stephen) Mugeche from Blue Springs, but he had to take the ACT today, but I still had good competition,” Gordon said. “They’re pretty strong runners, and I know them from a couple other races so I knew they would keep a strong pace the whole time. I wanted to stay by them and see if I could outkick them at the end, and it turned out to work.”
O’Fallon coach Jon Burnett said taking second place against such a strong field is a confidence builder, especially as the Panthers prepare for next week’s Peoria Invitational.
“This one doesn’t help us gauge ourselves as far as where we can be in Illinois, but it is good because there are a lot of good teams out here, and we can come out and get in the mix, very similar to our sectional and state meet in Illinois where there’s a lot of bulk in the races,” Burnett said. “Dorrian looked so comfortable. He was waiting for someone to make a move, and when no one made a move late in the race, he made the move and got separation immediately.”
SLUH rounded out the top three teams, beating fourth place Rogers (AR) by nine points, 119-128, and finishing 19 ahead of Lafayette’s 138 as second through fifth place were separated by only 28 points.
The Jr. Bills were running with heavy hearts after the passing of senior classmate Connor Lewis just a week prior to the meet. The runners wrote “C.L.” on their arms to honor Lewis. 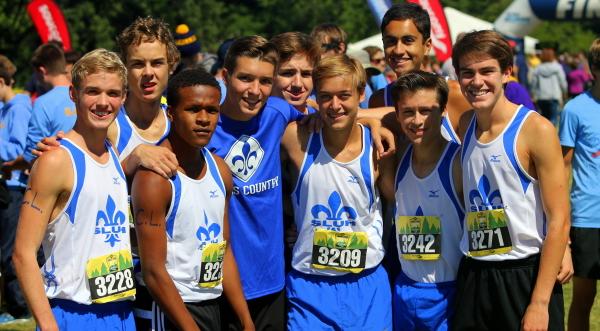 “I’m really happy for the kids,” SLUH coach Joe Porter said. “For our guys to come out and battle the way they did, to take third was great. We’re really proud of them for fighting and racing for Connor’s memory. It’s been a rough week for us in the building. We didn’t know how they were going to race, so we’re really glad with third after the week they had.”
Tweets by MoMileSplit