I'll never forget Caleb Wilfong sitting at my kitchen table when he was i think just a sophomore in high school. He was determined to be the best runner in the state and after winning Forest Park his junior year he was defeated at the state meet by Zach Herriott. In his senior year he had one more shot....and no one was going to stop him. 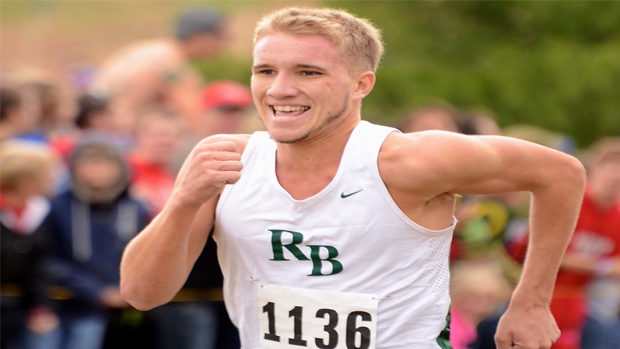 As the runners charged up Firehouse Hill, there was a glint in Caleb Wilfong’s eye.

The Rock Bridge senior could sense his moment building. He had been stalking Rockhurst’s Zach Herriott for two miles, and after the runners crested the hill, Wilfong put a charge into the race.

He powered down the side hill knowing there were only a couple turns left and he would see the finish line. Wilfong pushed through the final few hundred meters, capturing the Class 4 boys’ state cross country title with a wink and a smile.

“I felt it the whole time. I knew,” Wilfong said. “I passed him, and he’s not going to get me back. I knew it was going to happen since Forest Park.

“It’s something special that I deserve this year. I worked my ass off to get here, and no one was going to take it from me today.”

Wilfong lost out at Forest Park when Herriott built too large of a lead. Saturday on the Oak Hills Golf Center course, Wilfong attacked with a different strategy that centered mostly on his tenacity. After Wilfong crossed the finish line in 15:54, he was mobbed time and again by family, friends and competitors, and Wilfong’s embrace was emphatic with every one of them.

He was so energized from the victory Wilfong could have knocked out another 5k.

“Right now I could,” Wilfong said with a smile as he continued the procession of congratulatory hugs. “It feels amazing