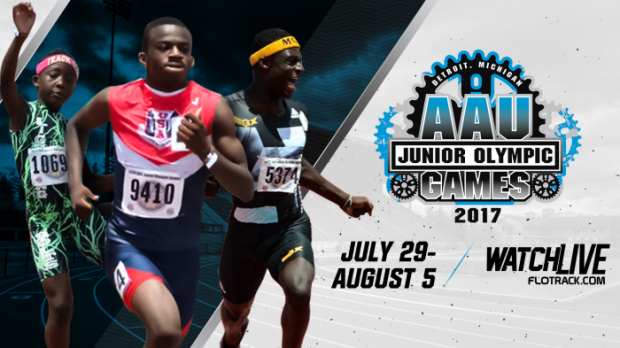 This weekend, Rynearson Stadium at Eastern Michigan University in Ypsilanti, Michigan will be playing host to the AAU Junior Olympic Games in Track and Field! Over 15,000 athletes across all sports will be in attendance with over half of that number being in track and field, making it the largest track and field meet in the country! Missouri has a very strong contingent with 717 performances in the entry list, not including relays.

You can see a comprehensive list of the Missouri athletes competing in Ypsilanti (page 2), headlined, of course, by superstar and John Burroughs rising sophomore Brandon Miller in the 800m and 1500m runs. Missouri has a number of other top seeded boys at the meet, too, though, including: Collin Wise of Columbia in the Race Walk (10 year olds), Jackson Cantwell of Columbia in the Shot Put (9 year olds), Julian Juszczyk of Florissant in the Javelin (13 year olds), Class 5 state champion KC Lightfoot in the Pole Vault (17-18 year olds), Larry Minner, Jr. of St. Louis in the Discus (13 year olds), and Michael Phillips, Jr. of St. Louis in the Shot Put (11 year olds).

Other athletes of note that will be competing include: SLUH's Lazarus Williams, the 4th seed in the 800m run (15-16 year olds); Matthew (Logan) Mehaffy of Liberty, 3rd seed in the Javelin; Class 3 100/200 champion Raheema Westfall of McCluer South-Berkeley, 8th seed in the 200m dash and 35th seed in the 100m dash; Rockwood Summit's Rayvon Allen, Class 4 Long and Triple Jump champion, who is the 2nd seed in the triple jump, but has cleared 50' this past track season. We expect to see many impressive performances across the myriad races in which Missouri athletes are competing this weekend!

Here's how to become a subscriber to Milesplit Universal: https://accounts.milesplit.com/signup?next=http://usa.milesplit.com/articles/216888

Note: A recap of the USATF Junior Olympics from Lawrence, KS will be coming soon after the conclusion of the meet this weekend.

Questions, comments, and concerns can be sent to kdeeken@milesplit.com